Square of Europe – is a former square of the Kievsky railway station. In its new capacity it was opened in September 2002. As intended by the Moscow government, the Square of Europe should symbolise the strive of Russia to integration into European society and significance of Russia, that it has always possessed in the European life.

Its birth in Moscow can be “attributed” to Russian-Belgian cooperation. The main decoration of the square is the fountain with the sculpture “The Abduction of Europe” that was created by a Belgian avant-gardist sculptor Olivier Strebelle. Belgium has presented this sculpture to Moscow after two Russian monuments were erected in Belgian cities.

“The Abduction of Europe” - is the most abstract sculpture in the capital. The antique plot about Europa, who was stolen by incarnated into ox Zeus, was the basis for it. The composition is an unusual tangle of glittering metal pipes, that represent the ox head. They say, that given the proper angle and illumination, one can clearly see a woman's silhouette.

Besides the fountain with the sculpture, the architectural ensemble also includes 48 columns with flags of European states, restaurant “Europa” and commercial-entertaining center.
Photos (4) : 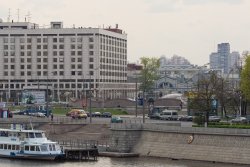 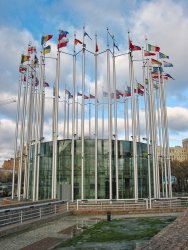 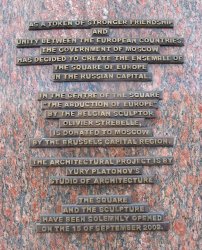