Kievsky (Bryansky) railway station – is one of the most beautiful stations in Moscow. It was built under the guidance of architect Ivan Ivanovich Renberg in 1913-1917.

At the end of the 19th century when construction of new and modernisation of old railways was actively going on in Russia, the tracks of Moskovsko-Bryanskaya railway were laid to the South of Bolshaya Dorogomilovskaya street. A temporary wooden building of station was constructed at that time. Construction of the permanent building was not started at once. Architect Renberg completed the design of then Bryansky station only in 1913.

Renberg decided to fundamentally renew the face of Moscow by making a unique design of the station, and architect Altorzhevsky and sculptor Andreev actively assisted him. And we should admit, they succeed in it, despite the difficult task they faced.

The facade overlooking the Moskva river has been chosen very successfully. However the station square did not exist in modern condition at that time, whereas Berezhkovskaya embankment was so much built-up, that there was not an inch of room there. Moreover, during floods the embankment used to be filled with water and boats used to sail in front of the station.

The unique nature of the Kievsky railway station is in its sculptures: not a single other station can be proud of such decorations. Among the sculptures there are unusual ones, representing the synthetic image, such as “Industry”, “Trade”, “South”.

A 51 meter high clock tower plays a special role in the composition of the building. Its upper part is decorated by sculptures (sculptor S.S. Aleshin), arch windows and miniature cupola pinnacle.

Spacious waiting lounges are decorated in the neo-classicism style, their decoration corresponds to the style of facades.

Adjacent to the station building is the platform hall, the solution of which is distinguished by simplicity and designer's boldness: huge area over platforms is covered by large-span arch structures, designed by V.G. Shukhov.

The building with Metro station “Kievskaya” vestibule (architect D.N. Chekulin), was added to the station from the northern side in 1940-45's.

At the end of 70's some restoration works were carried out, certain elements of the original interior decoration were restored, the roof over the platform hall was modernised.

According to the conception of architect Renberg the central tower of the station should have housed the chapel, but the revolution that broke out, prevented implementation of thas idea. And only dozens years later the chapel was made in Kievsky railway station in 2004. The icon-stand and murals were painted by icon painting specialists from Kaluga. 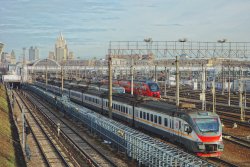 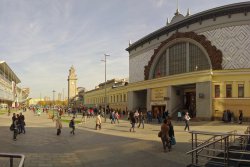 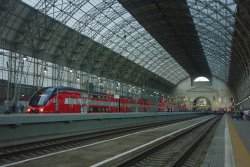 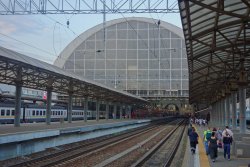 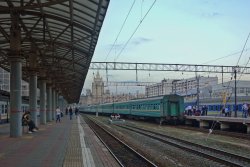 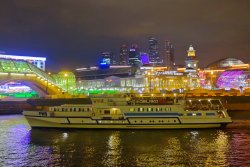 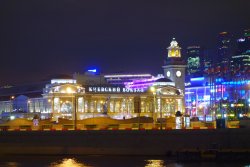 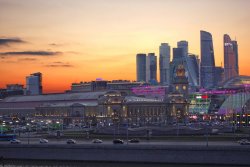 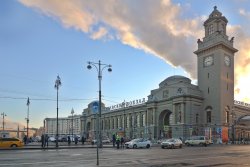