March 18, 2007
Savelovsky (Butyrskyi) railway station is considered to be the youngest of Moscow railway stations and the only one, which was named not after the city but the village – Savelovo. It was to that village at the banks of upper Volga in 1897 they started to lay a new railway that was supposed to link the capital with northern cities of Russia.

The site for the railway station was selected at the outskirts of Moscow near the Butyrskaya gate. The construction was delayed because of changes of the railway owners. Engineer A.S. Sumarokov was in charge of construction. In particular he is assumed to become the author of the design. The railway station building turned out to be rather modest, basically a single-storeyed structure and only in the center – two-storeyed, it did not even have the front access door from the station square.

On Sunday March 10, 1902 (old style) the station, named Butyrskyi, was consecrated and the first train started form it.

Initially only two pairs of trains ran every day: a passenger train started in the morning and mail train – in the evening. Then 4 pairs of long distance trains started to run from the station: 2 to Rybinsk, and 1 to Uglich and 1 to Leningrad.

The decision to rebuild and refurbish the Savelovsky railway station was taken in 1980s.

On September 1, 1992, 90 years after its construction, the renewed railway station opened wide its doors again. As a result of reconstruction, the station has become a two-storeyed one, has increased the inner space 2.5 times as much, but has not lost its style features. The front of the station was renewed, it was decorated by a clock with a unique face and elegant lights, main entrance was constructed in addition to the two existing ones at the sides of the building.

Today Savelovsky railway station is the only Moscow station, from which the long distance trains do not run. Only suburban electric trains connect it with such towns of the region as Dolgoprudny, Lobnya, Yahroma, Dmitrov, Dubna, Taldom.

The direct railway communication is planned to be opened between the Savelovsky railway station and airport "Sheremetyevo" at the end of December 2007. Then it will only take thirty minutes to get from Moscow to Sheremetyevo by a comfortable electric train, which is much faster than by motor transport.
Photos (4) : 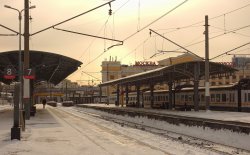 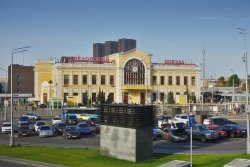 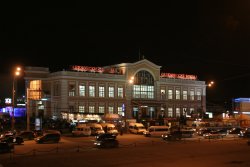