The monument to Alexander Ostrovsky

The monument to the Russian playwright Alexander Ostrovsky is standing just at the walls of the Maly Theatre that since the last century has been called "The Ostrovsky house": all his plays were staged here. The repertoire of the Maly Theatre always includes the plays of Ostrovsky that are of special pride of this theatre.

The monument was created by a talented Russian sculptor Nickolay Andreev. The idea to erect the monument to Alexander Ostrovsky appeared in 1880s. The government arranged collection of donations, but what was collected was not enough for the monument. The monument to the accuser of sins of the "dark kingdom" of old Russia got its birth at the Soviet epoch - it was unveiled on May 27, 1929.

Sculptor Andreev is known, first of all, by his sculpture images of Lenin. But for the Moscovites, the sitting in the armchair at the Maly theatre patriarch, is never associated with revolutionary upheavals. His image is a recollection of old Moscow, of Russian theatrical tradition.
Photos (3) : 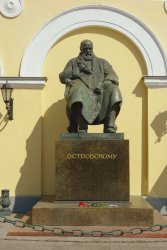 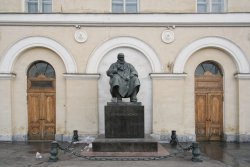