The monument to Karl Marx

The monument to Karl Marx is situated at the Teatralnaya square opposite the Bolshoi theatre. The idea to erect the monument to the leader of the world proletariat was conceived at the dawn of the Soviet power. On May 1, 1920 with Lenin participation they laid a foundation stone of the monument on the Teatralnaya square. Lenin and other leaders of the state put their signatures on a metal plate that was laid in the foundation of the future monument. The granite block bears the words: «The first stone of the monument to the great leader and teacher of the world proletariat Karl Marx». However, many years have passed before the monument was opened. In the 30s of the XXth century there were many designs to erect the monument, but all of them remained unfulfilled. It was only in 1961 when the monument was unveiled that was attended by a lot of foreign guests, representing communist and workers parties of all the world.

A huge block of Marx figure emerges from a granite rock resembling a rostrum in its shape. Marx seems to be speaking to the people powerfully dashing forward. The outstanding sculptor Lev Kerbel was awarded the Lenin prize.
Photos (2) : 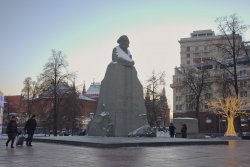 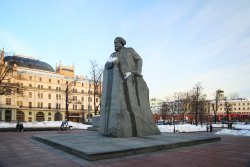