The monument to Kirill and Mephody

The Kirill and Mephody Monument on the Slavyanskaya (Slavic) Square was inaugurated in the spring of 1992. Kirill and Mephody are brothers who lived in the 9th century and created a Slavic alphabet, for which they were later considered to be Saints Equal to the Apostles. They are believed to be founders of the Slavic written language and culture and are revered in all Slavic countries. Every year, on the 24th of May, which is the day of religious commemoration of the Saints Kirill and Mephody, the Slavic nations celebrate the Day of Slavic Written Language and Culture.

The author of the monument - the sculptor Vyacheslav Klykov - tells that, when the Kirill and Mephody Monument was erected, there was a icon-lamp burning in a niche at the pedestal. However, some time later it had to be removed, because it had been repeatedly fired at. The bulletproof glass that protected the icon-lamp was all over in cracks. Fortunately, the icon-lamp itself was not damaged, but it had to be taken to the church building. However, even the empty niche of the pedestal was later fired at again. In the sculptor's opinion, the Russian sacred objects seem to irritate somebody.
Photos (6) : 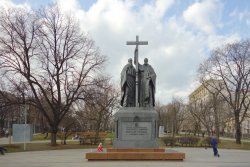 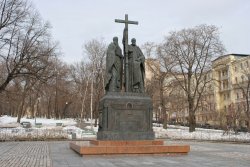 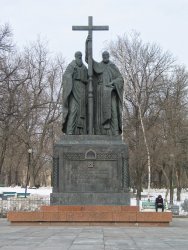 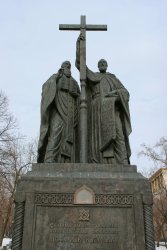 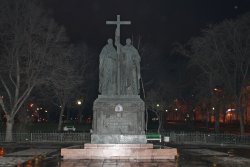 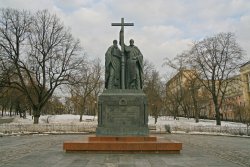