Memorial “To Heroes Of Plevna”

Memorial “To Heroes Of Plevna” or memorial “To Grenadiers Fallen By Plevna” is located in the park in the square at Ilyinskie Gates, not far from Polytechnical Museum.

In 1877 near the Bulgarian city of Plevna there was a historic battle between Russian army under the command of general Mikhail Scobelev and Turkish troops of Osman-pasha. 40 thousand of Russian warriors gave their lives to save their Slavic brothers from the Osman yoke.

The memorial chapel was built up at the cost of grenadiers’ donations in memory of comrades fallen by Plevna. The building of the memorial was supported by the whole Russian community who took the Russian-Turkish war as their sacred duty to protect coreligionist brother nations.

The Chapel of Plevna was unveiled on 11th December, 1887 on the 10th anniversary of the heroic battle. The author of the project was V. O. Sherwood - famous academician of architecture. All the interior surfaces of the chapel were decorated with ceramic décor.

Eternal icon-lamps were lit in front of the main icons of Saint Alexander Nevskiy, Saint George the Victorious and Nicholas Wonder-worker. Names of the officers and soldiers, who died by Plevna, were engraved on seven bronze boards inside the chapel. Elegant shape of the chapel was topped with structure resembling the Hat of Monomach and eight-pointed gold cross with crescent at the bottom. There was a grenadier guard of honor and an icon-lamp constantly lit in the chapel. Requiem was served every year on the day of battle of Plevna.

After the October revolution the chapel was ravaged and closed. During the Patriotic war the state needed the support of the church, so the chapel was put to rights, the cross was renewed and the epitaphs gilded. But no services were carried out. In the late 1950s the chapel was coated with preserving mixture and resembled a black monument of past times by some miracle left between the buildings of central committees of the Party and Komsomol.

Only Bulgarians grateful to the Russian people were placing wreaths on the memorial every year on the day of the battle of Plevna. Later on Bulgarian businessmen took part in its renewal.

In December 1992 the chapel was given to the church. In 1998, by the 120th anniversary of emancipation of Bulgaria from the Osman Yoke, the memorial chapel was consecrated and opened again. Since then requiem for grenadiers is served on 10th of December annually at the renewed chapel with shining gold cross.

When there were hard times in Yugoslavia (1999), when the NATO airplanes were bombing towns and cities, destroying Orthodox sacred places, requiems for the innocent dead were served in the chapel with lots of people present.

Soon a monument to the famous Russian-Turkish war hero – battle general Mikhail Skobelev will be erected not far from the chapel.
Photos (7) : 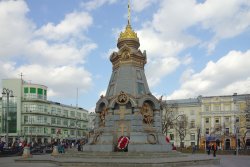 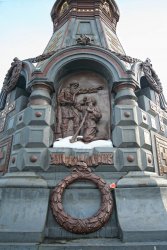 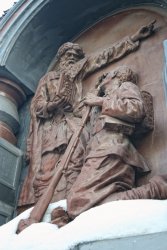 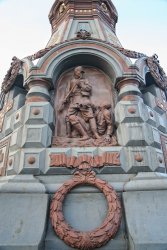 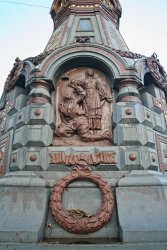 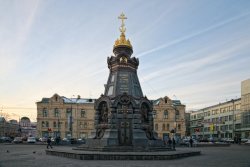