The monument to Nikolai Chernyshevsky

There is a round site in the park not far from Pokrovskiye Gates with the monument to 19-th century writer and thinker Nikolai Chernyshevsky. The author of the monument is Juriy Neroda.

The bronze statue is installed on a low granite slab. There is a granite wall with iron rings behind the statue and low parapets on the sides. There are four 19-th century street lamps in the place where paths meet the site. The monument was unveiled in 1988.

For his beliefs Nikolai Chernyshevsky was condemned by tsar regime to seven years of penal servitude and lifelong exile to Siberia. He wrote his famous novel "What Is to Be Done?" in the Petropavlovskaya Fortress, in the dreadful Alexeyevskiy Ravelin.
Photos (4) : 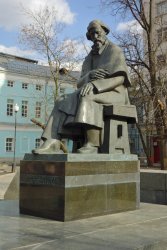 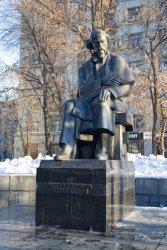 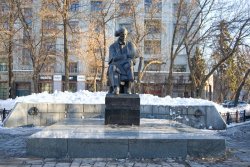