President Hotel (former Oktyabrskya Hotel) belonging to the Department of Affairs of the President of the Russian Federation was built in 1982. The hotel’s construction was the focus of special attention because the project was ordered by the Department of Affairs of the Central Committee of the Communist Party of the Soviet Union (CPSU). The hotel was designated to provide the necessary conditions for the leadership of the CPSU and the highest structures of the Soviet State in their foreign policy activities. The hotel had a very high status and special privileges.

One of the main attractive peculiarities of the President Hotel advantageously distinguishing it from the others is its location on the picturesque bank of the Moskva River, in administrative, business and trade center of Moscow. From the top floors of the hotel there is a beautiful view of the center of the city, the bank of the Moskva River, the monument of Peter the Great, the Cathedral of Christ the Saviour, B.Yakimanka Street leading directly to the Kremlin. The remarkable interior of the rooms and panoramic views of Moscow are frequently used by Russian and foreign producers in their films about Moscow.

In 208 comfortable rooms of the hotel up to 350 guests can be accommodated. Each room has a bath, telephone, satellite TV, safe box and other modern service amenities. The hotel has 20 individually designed halls with unrepeatable interior and most advanced technical equipment. More than 2000 participants can be simultaneously accommodated in these halls. The hotel has modern up-to-date technical equipment. Its sound amplifier and simultaneous translation Media Matrix system the analogs of which may be found only in a few foreign hotels allows to held the high-level meetings up to the heads of states and governments.
Photos (2) : 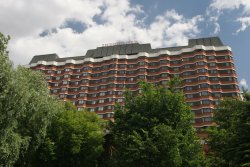