The Borodinsky bridge is called a museum bridge. It was constructed to commemorate the 100th anniversary of the 1812 Patriotic War and Borodinsky battle. This bridge has a very rich history.

It is worth mentioning that bridges were never built over the Moskva river in the past. Bridges over other rivers crossing Moscow were constructed from time immemorial. There were no bridges over the Moskva river as it had always been the natural line of defence. It was only in the XVIIth century, when Moscow became stronger, spread out and the danger of enemy troops invasion passed, they started to construct durable and reliable bridges instead of ford-ways, temporary floating or pile ones.

And in the place of the Borodinsky bridge just a few centuries ago there was a floating bridge, made of bound by twigs logs, placed right on the water. Ambitious in her might-have-been aspirations for the Russian crown, the Pole Marina Mnishek came to the First capital along such a bridge.

At the end of the XVIIth century the wooden bridge – then the Dorogomilovsky bridge – was already placed on ferries, and therefore it practically did not suffer from high waters. In 1812, weary military ranks that survived in a bloody battle near the village with the name practically unknown to anyone - Borodyno, were leaving Moscow walking on the wooden boarding of that bridge. In his novel «War and Peace» Leo Tolstoy gives a detailed picture of troops and residents abandoning Moscow. At that time the Dorogomilovsky bridge was 186 meters long and only 8.5 meters wide.

In August 1837 in commemoration of the 25th anniversary of the outstanding battle, the Dorogomilovsky bridge was renamed into Borodinsky. At the end of 1860s the wooden bridge was replaced by the metal one, having placed it on stone piers. And in 1912 to the centennial jubilee of the Patriotic war, the bridge was dismantled again and built the new, much wider one, designed by the architect Klein. It was crowned with ceremonial obelisks and cast-iron fence with military symbols. By the considered architectural decoration, Klein turned the Borodinsky bridge into a peculiar monument to the Russian warriors, who fought to the bitter end at the Borodinsky field.

Freely placed in semicircle the Dorian order colonnade stands at the entrance sides from the side of the Smolenskaya square. Common geison, with cast iron ornamental pyramids of ancient military armour and banners on top, connects every six columns. Riverside bridge structures are made in shape of bulwarks. The cast iron grille of the parapet features medallions depicting various military insignia. The architect succeeded in imparting the triumphant nature into decoration of the monument bridge, which emphasizes greatness of the Russian people victory in the 1812 Patriotic war.

Cast iron boards with names of heroes are fastened to the pedestals of symmetrical tetrahedral obelisks.

During the Soviet times the bridge used to be modernised and expanded more than once. However the architectural look of the museum bridge was carefully preserved. In 1952 the newly modernised bridge was 44 meters wide. The Borodinsky bridge was not only significantly widened but also extended. Arch spans are made under its descents to open the road along the embankment under the bridge. In November 2001 the Borodinsky bridge was unveiled after the recurrent modernisation, at which, while replacing arch spans, the bridge height over the Moskva river level was increased by 1.5 meters.

The Borodinsky museum bridge can be well seen from the «Radisson Slavyanskaya» hotel.
Photos (12) : 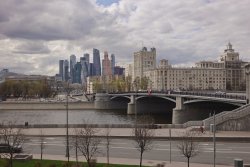 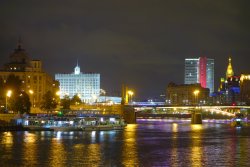 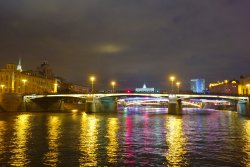 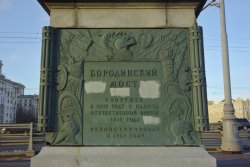 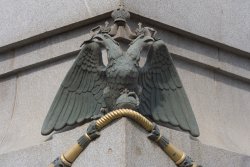 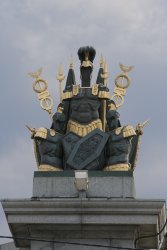 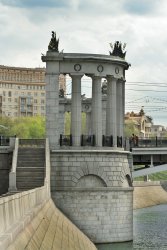 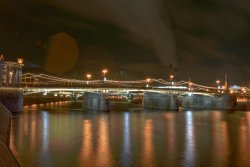 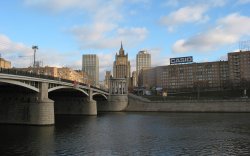