The monument to Shota Rustaveli

Shota Rustaveli is a great Georgian poet and thinker of the XIIth century. He remained in the memories of the ancestors thanks to the magnificent poem about love and courage «Vityaz v tigrovoi shkure» («The Knight in the Tiger's Skin»), the lines from which are carved on the sides of the monument: «Having conquered evil, the good will reign this world forever» and «Who doesn't search for friends makes a foe to self». The poem has been translated into many languages. Such great poets as Konstantin Balmont and Nikolay Zabolotsky translated it into Russian.

The monument to Rustaveli in the park of Gruzinskaya square was unveiled in autumn of 1966 when the whole world celebrated the 800th anniversary of the ingenious Georgian poet. The author of the monument is the sculptor Merab Berdzenishvili, people's artist of the USSR.

Bronze Shota Rustaveli has for ever mounted the pedestal of red polished granite in the «Georgian corner» of the Russian capital. At the beginning of the XVIIth century the King of Georgia Vakhtang Levanovich came to Moscow with a huge suit. At the outskirts of the city near the village of Voskresenskoie, where they took up residence, a Georgian settlement appeared very soon. Now the streets and squares at that place bear Georgian names.

Twice a year - on May 6 and November 23, at the Day of great martyr Georgyi, who is thought to be the protector of Georgia, living in Moscow representatives of Georgian diaspora, get together near the monument.
Photos (3) : 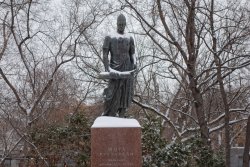 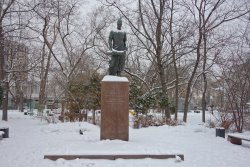