June 1, 2007
Mikhail Sholokhov is known all over the world as the author of the novel “And Quiet Flows the Don”. He was awarded a Nobel Prize for it.

The monument was inaugurated on the 24th of May 2007, on the author's 102nd birthday anniversary.

The author of the novel “And Quiet Flows the Don” is depicted sitting in the fishing boat. At the background of the composition there is a high relief that depicts the flow of the imaginary river, horses are swimming along it in a wedge-shaped group. Due to the creator’s idea they symbolize the split for “the white” and “the red” during the Civil War.

The authors of the monument did their best to match it with the boulevard scenery, and the accompaniment of the flowing water creates an important sound background, illusion of reality.

There is a granite bench installed along the alley, opposite the monument; and the paved diagonal band, which crosses the alley, unites the whole architectural and sculptural ensemble. That is how, due to the creators’ idea, is realised the versatile works of the writer, who was working in the restless time of great social changes.

The monument is performed in bronze, and the pedestal and the bench – in granite.

The erection of this monument caused ambiguous reaction in the capital. Part of the Moscow citizens strongly objected: it contradicts the history, the writer lived in Moscow for a very short period of time, the boulevard is named by Gogol, Sholokhov has nothing to do with that place. And so on and so forth; but there is only one idea behind it: he was a Soviet writer and we object to perpetuate the memory of Sholokhov.

In the south-east of Moscow there is another monument to Sholokhov (on Volzhskiy boulevard). On every writer’s birthday anniversary flowers are laid there.

Alexander Rukavishnikov, national artist of Russia, the head of the creative team is famous for his monument to Fedor Dostoyevsky in front of Russian State Library and monument to Yury Nikulin on Tsvetnoy Boulevard.
Photos (6) : 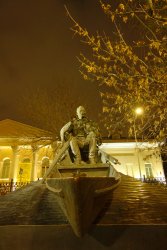 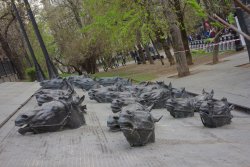 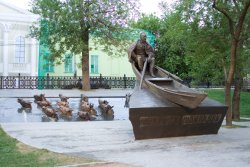 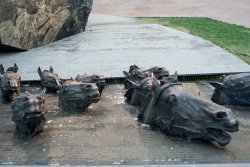 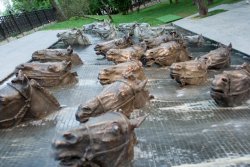 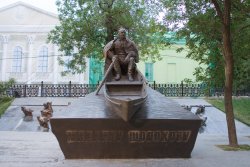