May 5, 2007
Melnikov House in Krivoarbatsky lane in Moscow is valued in the world as one of the main masterpieces of the XXth century architecture. The last private mansion built in the centre of Moscow has become an acknowledged masterpiece of Russian constructivism architecture. The house was built in 1929 for his family by the founder of this architectural style Konstantin Melnikov (1890 – 1974).

World-wide fame came to Melnikov in 1925, when the Soviet pavilion, built by him at the International exhibition in Paris, aroused general admiration. During the next ten years he implements his unique projects, builds factory clubs and administrative buildings. And then for 30 years the architect was forgotten. He was neither subjected to repression nor exiled. Simply forgotten.

Nowadays, many buildings, built by Konstantin Melnikov, are in a sad state, lost their unique interior and need reconstruction. Generally, the situation, in which majority of the monuments of the Soviet period architecture of 1920 – 1950s are present, is called by specialists as disastrous.

However, the «Round House» at Arbat – is something peculiar. People from different parts of the Earth come to see it. For many years the son of the architect – Victor Melnikov – used to live in that house. Under him an informal museum realistically functioned in that house, and the whole world knew that. Very many universally famous people used to visit that house.

In 2005 the «World Monument Fund» included Melnikov House into a famous list of 100 the most important architectural monuments of the whole world, the destiny of which causes alarm and needs firm political and financial support.

Moscow authorities began to speak about turning Melnikov House into a museum and started negotiations with the architect heirs.

However, when half of the house was purchased by a young businessman and senator Sergey Gordeev, the public in Moscow got seriously anxious, supposing that Gordeev tries to get the architectural monument into his ownership and will individually use it.

Gordeev himself says that he wants to make a museum of Russian architectural avant-guard in Melnikov House. Moreover, the senator states that he is unconditionally ready to hand over Melnikov House to the State. He also promises to completely restore the famous building at the cost of private funds. Specialists hope that the interior of the house, as it was during the life of Melnikov, atmosphere, in which the great architect used to live, would be recreated.

One has to hope that the destiny of the house Krivoarbatsky lane will become a pleasant exception, and, as it is planned – the state Museum of Melnikov House will be inaugurated on January 1, 2008.

«... In distant 1927 one of the leaders of Mossovet comrade Domarev used to grant permission for construction of the house in Krivoarbatsky lane. They wanted to build a kindergarten at that site, but, having seen the design of Melnikov House, Domarev, a former worker, said: «We shall find a site for the kindergarten, but nobody will ever build such a house. We have only one Melnikov!» (Newspaper «Vecherniaya Moscow», 1989).
Photos (2) : 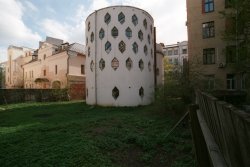 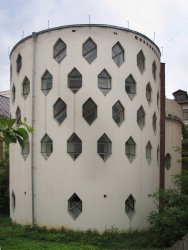