Kazansky (Ryazansky) railway station of the capital is one of the most outstanding creations of the domestic architecture. Although the station has not acquired its present look at once.

This is the third railway station at the Kalanchevskoye field. The first small building of Ryazansky station, built by architect M.Yu. Levestam in 1864, had a common roof with the platform. A small turret with clock raised above the entrance. The station was cramped, inconvenient and from the architectural point of view – not very expressive. Only a single-storey tracery building of depot, made in Italian style, remained from the station complex till now.

In 1893 the railway was extended till Kazan, the passenger traffic has considerably increased. The need in the new station was apparent. However, the authorities could not select the suitable design for a long time. In 1910 the old building had to be urgently modernized: the premisses for the I and II class were considerably increased. But it had not solved all the problems.

The design of the architecture academician A.V.Schusev was the first in the urgently announced contest. In fact, Schusev conceived the station not only as a functional building but as a piece of architecture, destined to decorate both the Kalanchevskoye field and Moscow as well. Construction, under the guidance of the architect himself, started at the end of 1913.

Kazansky railway station was considered as a gateway to the East. Interchange of two cities – Moscow and Kazan – had to be traced in architecture and finishing of the station. Such outstanding artists as A.N. Benua, B.M. Kustodiev, ZE. Serebryakov, M.V. Dobuzhinsky, N.K. Roerich, A.E.Yakovlev, I.A. Bilibin, and later - E.E. Lanceray were invited to decorate the halls.

World War I, then revolutionary events in Russia not only delayed the works but also prevented from implementing all architectural plans of Schusev. In 1919, when electrical illumination was provided in the main building, only a portion of the Kazansky station was inaugurated. It is thought, that the first stage of construction was completed in 1926, and the second one – in 1940.

Even at the very beginning of construction Schusev thought of a tower over the central entrance – similar to the princess Suyumbeki Tower in the Kazan Kremlin with coat of arms of Kazan kingdom – golden conventionalized small cock, and right underneath the tower – a huge clock. He ordered bronze zodiac signs for it in Petersburg, the pictures of which he made himself. But the famous railway station clock, made by a clock-maker V. Pushkarev, was only started in 1923 and continued to run till autumn 194,1 when a bomb explosion destroyed the tower and it was reconstructed in its original shape only in 70ies.

The underground hall for suburban passengers, that had exit to the metro, was constructed in 50ies. Modernization of the station in 70ies resulted in the increased traffic capacity of the station, and simultaneously a lot of things were done to implement into life the architectural-artistic design of A.V. Schusev. This work was continued in 90ies, when new waiting halls, tunnels from trains to the metro stations and to the Komsomolskaya square were built. A unique large-span roof was provided over the platforms.

Underground tunnel, connecting all the three railway stations of the Komsomolskaya square, became the longest one in the capital. 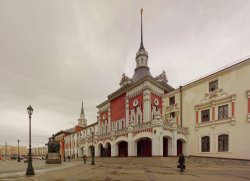 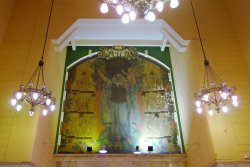 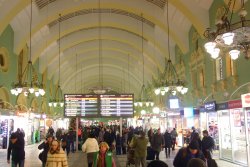 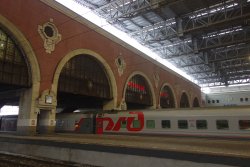 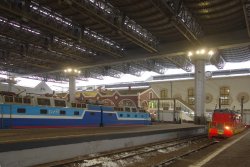 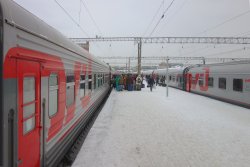 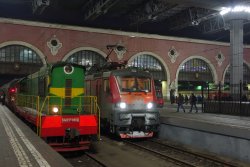 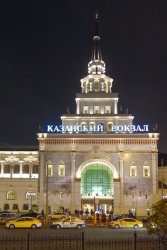 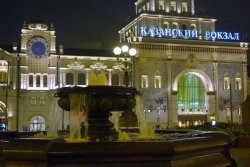 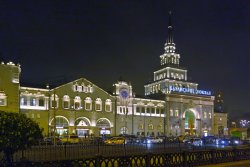 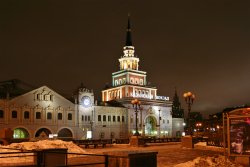