The Belorussky station was inaugurated in 1870. During its history it used to change its name more than once: it was called Smolensky, Brestsky, Aleksandrovsky, Belorussko-Baltijsky.

In the course of development of Russian railways and enhancement of passenger traffic, the initially built station became small. In the beginning of 90-ies of the XIX century, the railway became double-track, whereas there remained only one departure platform. Station rooms, especially of the third class, could not accomodate passengers of even one train. The issue of enlargement of the station became very acute.

Reconstruction could only be started in 1907. I. Strukov became the designer of new Brestsky station. The structure consisted of two buildings, converging at an obtuse angle. Angular portion – at that time single-storied – was designed for royal chambers – and was named «Royal corner». New chief of the railway, military engineer General F. Metz took an active part in its construction.

By spring 1910 the right wing of the building was ready. Four embarkation platforms appeared at the station. The extreme one – Imperial – was at the same time an intermediate one via the connecting line with Nikolaevskaya main line.

The grand opening of the first turn of the station was on May 25, 1910, whereas the ceremony of consecration of the left wing took place almost two years later – on February 25, 1912.

New station was both beautiful and spacious, its area was 3 times larger than the area of the previous station. Reconstruction cost the state treasury almost one million of roubles, but the money was not wasted. Architectural face of the building, finishing of interiors and the newest technical equipment of telegraph and booking offices, where the railway ticket printing machines were installed for the first time in Moscow, aroused general admiration. The press used to specially point out that «the complete building was made of steel and concrete and it was fire-proof».

Constructed in the neoclassicism style with elements of false Gothic and Empire, the station really was very impressive. The building face was decorated with cartouches in shape of shields with railway emblems. Four elegant turrets with flag posts towered over the entrances to passenger halls.

Its present name – Belorussky railway station acquired in May 1936, after recurrent reorganization of railways.

In 1938 the metro station «Belorusskaya» (Zamoskvoretskaya radial line) was opened in the right wing of the station.

Belorussky railway station witnessed many significant events: in 1928 Gorky, who returned from Italy back home, was met here; in 1937 – pilots Chkalov and Gromov were welcomed; in 1938 – polar research expedition headed by Panin.

Belorussky railway station is also called the «Victory station». First military trains, accompanied by the song: «Arise, so great a country! Arise to deadly fight!» started from here in 1941. This station greeted Soviet soldiers-liberators, returning from the war in victorious 1945.

To commemorate those heroic days, it was decided that next to the station a temple should be erected, which was sanctified on the eve of the Victory jubilee, in the very day of the saint great martyr Georgy Pobedonosets (George the Vistorious) holiday.

A new building of the station was built in 1976 in extension of the existing one. Some partial reconstruction of the old station was done at the same time. 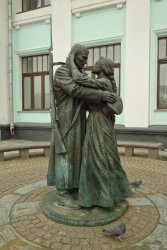 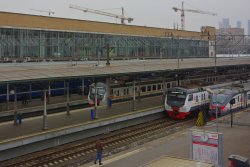 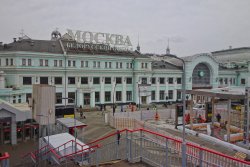 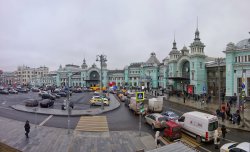 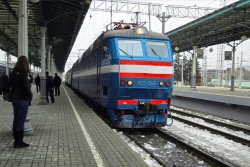 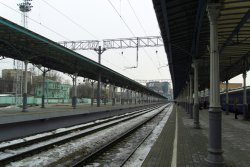 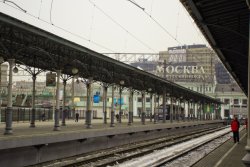 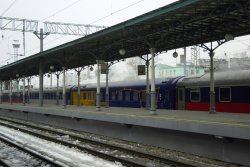 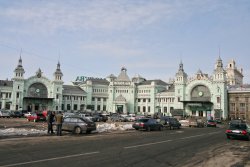 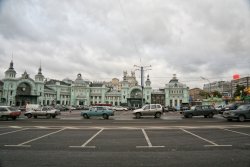 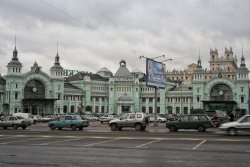 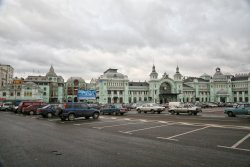