The monument to Kliment Timiryazev

The Nikitsky boulevard starts with a wide ground, in the center of which there is a monument to K.A.Timiryazev – great Russian botanist and physiologist. The monument was erected in 1923. The sculptor S.D. Merckurov portrayed the scientist in the Doctor gown of the Cambridge university, whose honorary doctor he was elected. The pedestal bears the inscription “To fighter and thinker”.

This is one of the oldest monuments of the Soviet period. It can also be called a “war veteran”: in 1941 when the battlefield was at the walls of Moscow, the enemy aircraft that burst through to the capital dropped bombs to the Boulevard ring. Many buildings were demolished, and the monument to Timiryazev was seriously damaged – it was thrown away from its pedestal by a blast wave. The monument was restored within a record short period of time.
Photos (3) : 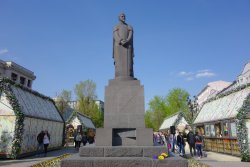 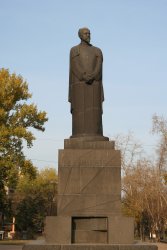 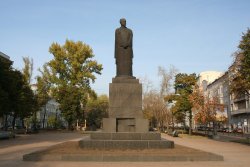