The monument to Yuri Dolgoruky

The first annalistic mentioning of Moscow is linked with the name of Yuri Dolgoruky. He is considered to be the constructor of the first city fortification on the territory of Moscow. That is why the reputation of founder of Moscow got permanently stuck to Yuri Dolgoruky. In the Soviet times the monument to Prince Yuri Dolgoruky was erected to become one of the main symbols of the capital. The authors of the monument are A.P. Antropov, N.L. Shtamm and S.M. Orlov.

The monument was erected opposite the city hall of Moscow. Before the October revolution it was the house of the governor-general. From the house balcony the governor-general made announcements, read decrees and orders, greeted the Moscovites. And opposite the house in 1918 there was a monument to Mihail Skobelev, erected for the popular money. Skobelev was a hero of war with Turks for liberation of Bulgaria. After the revolution the monument to the tsarist general was destroyed, and the new composition appeared in the square – obelisk of Constitution and statue of Liberty (sculptor N.A. Andreev). In May 1941 this monument that did not please the authorities, was also destroyed. In 1947 during celebrations of the 800th anniversary of Moscow, at the sites of temporary monuments the stone was solemnly laid with the pledge to erect the statue of Yuri Dolgoruky.

The stone prince on horse (works by sculptors headed by S.M. Orlov) the Moscovites saw only in 1954. At the solemn ceremony, when the statue of Yuri Dolgoruky on horse was unveiled, they say, that somebody cried out: «Not resembling!». It was funny as there remained no images of prince Dolgoruky who lived in the 12th century.

During New Year celebrations of 2006 as per instructions of the mayor the rider was clad in the suit of Santa Claus. It is worth mentioning that not all the Moscovites adequately perceived that New Year joke.
Photos (8) : 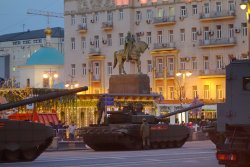 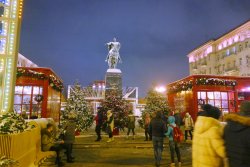 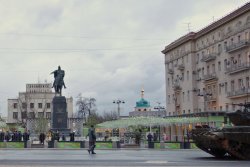 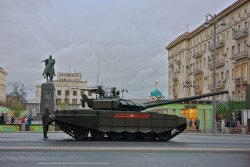 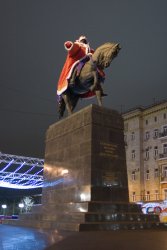 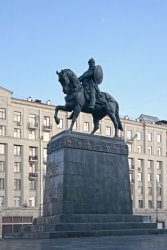 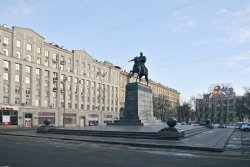