For the first time the Savoy Hotel has opened its doors on March 30th, 1913. The Hotel has been raised on demand of the Salamander Fire Insurance Company, which has redeemed the princess Argamakova-Turkestanova’s estate at the corner of Rozhdestvenka and Pushechnaya Streets. Since then a salamander became a Hotel’s symbol and a talisman. Argamakovs hereditary aristocratic family was known long before 18-th century as strong and devoted supporters of the Russian throne and was related to a well-known Russian playwright Denis Fonvizin.

The Salamander Company’s name as well as its motto “Never burnt in fire” was invented by a writer Alexey Pogorelsky. A salamander, that according to mythology is a small lizard living in flame, also became a symbol of the Savoy. Now everyone can meet its image in sumptuous stucco molding, on carpets, in mosaic on the swimming pool’s bottom.

While working at the project, the architect has turned to empire; this neoclassical style was extremely popular in Moscow that celebrated the anniversary year of a Patriotic War’s victory. Sumptuous interiors of Savoy restaurant were designed in rococo aesthetics, and this design concept is still lasting out. From the very first days the hotel Savoy, featuring the latest facilities, embodied luxury and comfort. Even its name conveys an idea of splendor and richness: the Savoy Duchy in the French Alps was famous for magnificence of castles and untold wealth of their aristocratic owners.

Since 1958 the Hotel became a part of Intourist system and was renamed into "Berlin". And even then, having lost the original name, the Savoy preserved its unique aura, which both Moscowers and foreign visitors could feel. After profound reconstruction of 1989 the historical name has been returned. Savoy became the first Moscow hotel rendering service of the international level. Lately the hotel had the honor to welcome a plenty of world celebrities: outstanding Italian tenor Luciano Pavarotti, an Italian opera star Lucia Aliberti, movie stars Richard Gere and Jane Fonda, the owner of the largest TV-channels Ted Turner and many others. Their names are the best recommendation for the Savoy. 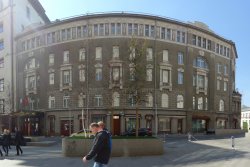 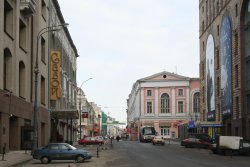